Avvo and Google: Not Quite an Axis of Evil, but… 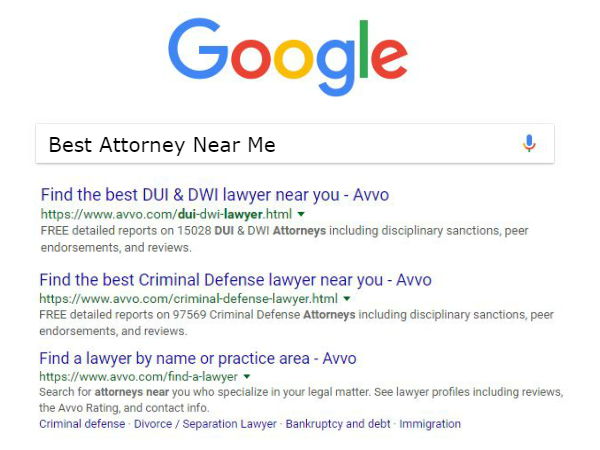 You know it’s necessary because of its popularity among prospective clients – but why evil?

Avvo remains a key destination for people seeking an attorney for a number of reasons. It is viewed as credible, authoritative — and a place where satisfied clients may post a review about your services. Plus it offers you a free directory listing (accompanied by competitors’ listings) and a chance to gain higher visibility by answering visitors’ legal questions.*

But there are two key problems to the Avvo solution.

For one, they’ve gotten much more commercial; it’s become a site where your Avvo visibility may require you to advertise there.

Start with Avvo Pro for $49/month. Remember that free directory listing they give you? As a Pro, your competitors’ ads won’t be shown alongside.

Next hook: they’ve set up their site to where it’s just about mandatory to advertise there. As they say, “Avvo advertisers receive up to 70x more contacts than non-advertisers.”

It seems Avvo has a sweetheart deal with Google so that Avvo listings like the one below are often positioned right below AdWords ads and above the Local/Map section (where you should appear for free).

(Note that Google allows Avvo to use “best” but your state Bar probably doesn’t.)

Avvo sometimes even gets a double listing (above the attorneys), which is where their featured advertisers are listed. 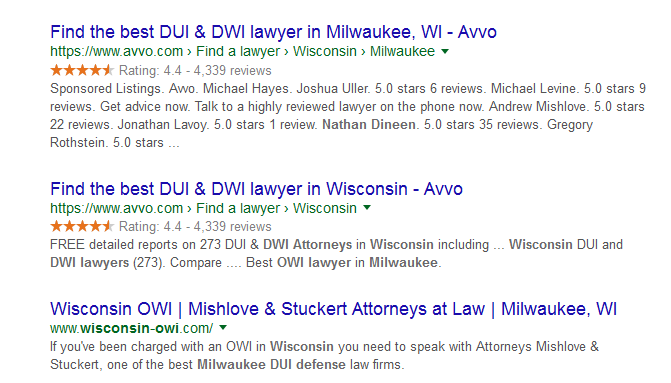 That means lawyers who have earned the right to be numero uno in the organic section may at times be trumped by a less-deserving firm paying the Avvoricious legal directory.

Another downside of potential clients looking for what you do: Unless you join Avvo’s stable of attorneys willing to offer cut-rate fees – with Avvo taking their cut — your prospective clients could we taken in by this headline on their homepage: “Get the legal help you need, at a fixed price.”

The site’s value to you skyrockets, however, when it comes to satisfied clients. You’d be well served to encourage them to post reviews. Do your best to make it happen!

Bottom line: if you’re trying to get your practice off the ground, Avvo is, indeed a necessary evil. If you’ve worked with a talented local Internet marketing firm, your need for Avvo should be lessened considerably.

Caution: Don’t encourage questioners to contact you directly from Avvo. Further, don’t add contact information or links to your website in answers or answer disclaimers. Finally, answers should not be self-promotional.